Posted on December 3, 2012 by ericrossacademic

At long last, in time for Christmas and well worth the wait, a piece of field research I conducted nearly six years ago and presented at a conference over five years ago has been published in an edited volume: “Christmas in Cambérène, or how Muhammad begets Jesus in Senegal,” in Muslims and Others in Sacred Space, edited by Margaret Cormack (click to download pdf version of my chapter). “Christmas in Cambérène” deals with a religious ceremony organized by the Layenne, one of Senegal’s lesser known but ever so intriguing Sufi orders. The ceremony, called “l’Appel de la jeunesse,” is held annually on Christmas Day and offers an opportunity to explore how the figure of Jesus—recognized as a great messenger of God in Islamic theology—is reconfigured within this Senegalese Sufi order.

Blue-eyed blond-haired Jesus, represented according to the Catholic conventions, shares a face with the Layenne caliph Seydina Issa Rohou Laye (“Our Lord Jesus Spirit of God”), whose depiction is based on an iconic colonial-era photograph. This composite image (artist unknown to the author) was displayed during the Christmas 2006 celebrations and has since been reproduced in many media. (ph. Eric Ross)

Like Senegal’s other Sufi orders, the Layenne order was established late in the 19th century by a spiritual master, Seydina Mouhammadou Limamou Laye (1844-1909). It is the smallest of Senegal’s orders. Largely confined to the Lebou ethnic group of the Cape Vert peninsula, the Layenne order has about 30,000 adherents.

Layenne doctrine is messianic and millenarian. The founder, Seydina Mouhammadou Limamou Laye, is considered to be both the mahdi (the divinely guided leader who appears at the end of days to set believers on the Straight Path) and a reincarnation of the Prophet Muhammad. Seydina Issa Rohou Laye (1876-1949), his eldest son and successor, is considered to be Jesus reincarnate. While such doctrines of reincarnation and second comings are certainly not normative in Sunni Islam (they play a greater role in Shi’i theology), the small Layenne order is a fully accepted institution within Senegal’s diverse religious landscape, and it is particularly important to the Lebou of Cape Vert, home to Senegal’s capital city, Dakar.

Primary sources on the Layenne are in Arabic and French, and there are also a few studies of the group published in French (see bibliography at the end of this post). The Layenne also have a semi-official website, www.layene.sn, with material in French, English, Spanish, Italian and Arabic. To the best of my knowledge my contribution to the edited volume announced in this post is the first study of the Layenne to be published in English. I am hearing through the academic grapevine that other researchers are currently at work and you can expect the publication of more English-languages studies on the Layenne in the next few years.

In all honesty, mine is not a study of the Layenne Sufi order per se. Rather, I conducted a brief field study of one, minor, Layenne celebration in order to contribute to a broader research agenda initiated by the volume’s editor, Margaret Cormack. I first met Margaret in Iceland in June 2006. I was attending a workshop she had organized on the use of geographic tools for the study of saints (see this post about Icelandic cemeteries). Margaret was already preparing her next academic project, an international conference-cum-student seminar on trans-religious interactions at Muslim shrines, i.e.: how Muslim and non-Muslim devotees interact at certain shrines, to which she kindly invited me. The conference was held at the College of Charleston, South Carolina, in March 2007 and was well attended by Margaret’s Religious Studies students. About a dozen very focused papers were presented at the conference, most of which were then written up for this peer-reviewed edited volume. This is thus another case of conferences driving not just the publication process but the entire research agenda (see my post on conferences and publication). 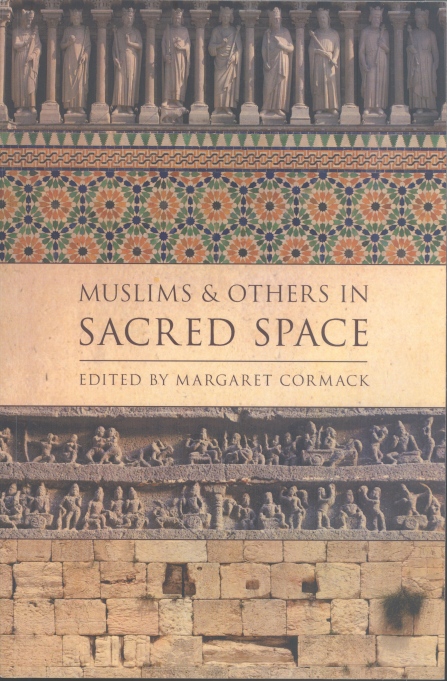 Muslims and Others in Sacred Space, edited by Margaret Cormack, has just been published by Oxford University Press.

The shrines explored in this book included Isma’ili cave-shrines in Gorno-Badakhshan, holy tombs and cemetery shrines across South Asia, the Christian monastery of Mar Jiryis (Saint George) in today’s occupied Palestine, the numerous shrines to Khidr throughout Turkey, interactions between Muslims, Christians and Jews at shrines in Fāṭimid, Ayyūbid and Mamlūk-era Egypt, and stories about monasteries in the prosaic literatures of Late Antiquity and the ‘Abbasid era. Cambérène is thus in great company. My brief stint of field work there during Christmas 2006 (a memorable Christmas excursion on the way from Iceland to Charleston) consisted of direct observation, interviews, mapping, and documentation (including the photos posted here).

The “Appel de la jeunesse” ceremony has been held in Cambérène every Christmas Day since 1994. Attracting people in their hundreds rather than in millions, it is a very small religious event by Senegalese standards. Yet it is very “on message.” The call is aimed directly at Layenne youth. It was first organized by Chérif Ousseynou Laye (1945-2009), son of Seydina Issa Rohou and younger brother of the current Layenne caliph, El-Hadj Abdoulaye Laye. 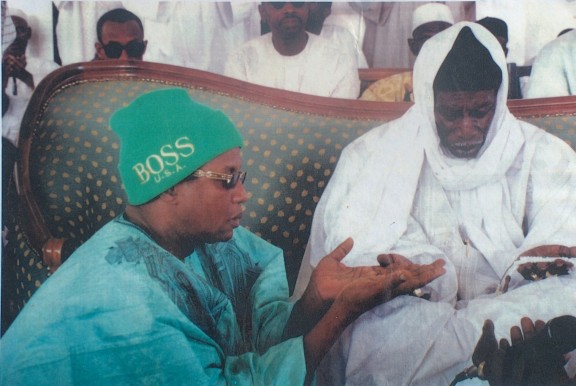 During my interview with Chérif Ousseynou, the religious leader told me that the event serves two purposes. It celebrates the birth of his father Issa/Jesus on the appropriate Catholic date (there are a lot of Catholics in Senegal and in Dakar in particular), and it gives young people something to do at a time of year when such satanic temptations as drinking, drugs, partying and clubbing become all too appealing. In fact, the organization of the celebration requires a great amount of preparation and follow-up work: logistics, equipment, transportation, meals, communications, etc. Young members of the Layenne order, organized by Chérif Ousseynou Laye within an association called Farlu ci Diiné-ji (or “Mobilization in Religion”), spend months working towards the event and are fully occupied by it during the Christmas holiday season.

Young members of Farlu ci Diiné-ji maintaining good order on Cambérène’s Diamalaye during the celebration. Their tunics have the iconic portrait of Seydina Issa Laye printed both front and back. (ph. Eric Ross)

The more visible purpose of the Christmas Day event in Cambérène is to celebrate the birthday of Issa/Jesus, and this is what drew me to it given Margaret Cormack’s very focused research objectives. In Cambérène, a suburb of the Senegalese capital, we have a Sunni Sufi order not only celebrating Jesus as a messenger of God but integrating the figure of the Christian Messiah into the very heart of its doctrines and collective identity.

Seydina Issa Rohou Laye, Jesus reincarnate leading a Muslim community under French colonial domination, is remembered as a modernizer, reformer and builder. He implemented public health measures, helped recruit conscripts for the French army during both world wars, and represented l’Afrique Occidentale Française at the colonial exhibition in Vincennes in 1931 as an invited dignitary. For these services he was awarded high civic honors. These medals figure prominently in the official portraits taken of him.

In this full-bodied portrait Seydina Issa Rohou Laye poses with an array of honorific civic medals received from the French authorities. (photograph displayed at the Diamalaye exhibition 2006)

One fine portrait of Seydina Issa Laye in particular has become iconic. It is reproduced in many media, including pamphlet covers, T-shirts, pendants, murals and all types of public signage.

This head portrait of Seydina Issa Laye has become iconic. In this version (photograph displayed at the Diamalaye exhibition 2006) the portrait is juxtaposed with the seal obtained in the Hijaz in 1920-21 which states his sharifan status.

In 1914, five years after Seydina Issa Laye acceded to supreme authority over the order he inherited from his father, Dakar was struck by an outbreak of the plague. The original settlement of Cambérène, which his father had established in the 1880s, was hit particularly hard. Seydina Issa decided to abandon the site and to move the survivors to a new village, which he also named Cambérène. The new location, on a beach next to the Atlantic Ocean, was considered to be healthier than the old one. Seydina Issa Laye is remembered for having overseen its construction directly, verifying that lots and houses were properly aligned. Since the 1980s the village of Cambérène has been engulfed by Dakar’s urban sprawl, but it maintains much of its original morphology (download this kmz file to explore Cambérène on Google Earth).

The Layenne village of Cambérène is completely enmeshed in the urban fabric of Greater Dakar. (source image: Google Earth)

The Layenne settlement of Cambérène consists of two distinct spaces: the village proper and a prayer ground called the “Diamalaye.” This configuration reproduces the layout of Yoff-Layenne, Seydina Mouhammadou Limamou Laye’s first village in his native Yoff, four kilometers to the west (see this post about a recent visit to Yoff). The two spiritual centers: Yoff-Layenne and Cambérène, are linked by a windswept stretch of beach, beautiful but dangerous and terribly polluted (no swimming!).

Map of Cambérène on Christmas Day 2006

The “village” (the term “village” is still used even though both Cambérène and Yoff-Layenne are now urban neighborhoods) consists of large compounds for extended families grouped around a small public square and the Friday Mosque. Kër-gu Mak, the residence inhabited by Seydina Issa Laye and still used officially by caliphs of the order, stands on the west side of the square facing the main entrance to the mosque.

Cambérène Mosque as seen from the Diamalaye. No smoking is allowed in Layenne villages. (ph. Eric Ross)

On the beach to the east of the village is the Diamalaye, a large open assembly space used for ‘Aid prayers and large religious gatherings. This is where the “Appel de la jeunesse” commemorations are held. 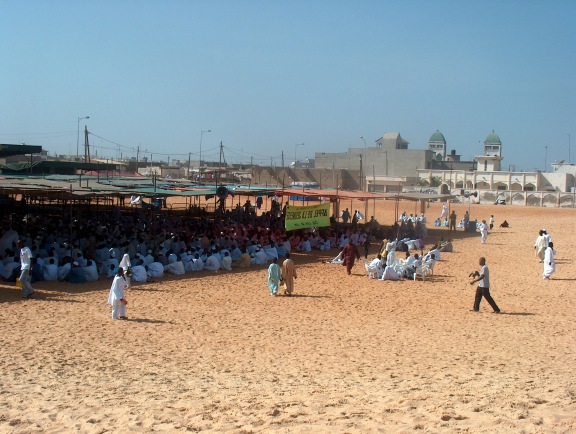 Participants and visitors gather under tents on the Diamalaye. (ph. Eric Ross)

The all-day event consisted of sessions of group dhikr recitation followed by more official sessions during which speeches were delivered and messages read out by religious and civil dignitaries, i.e.: people with moral authority over youth. Dhikr recitation continued in Cambérène homes all through the night, though I didn’t stay that long.

The Diamalaye also harbors the mausoleum of Seydina Issa Laye. In 2006 this mausoleum was undergoing a thorough reconstruction so I was not able to visit it, but has been completed since (see recent satellite image above).

The most interesting, and most unexpected, phenomenon I observed on Christmas Day 2006 was a visual display on Jesus/Issa which the Farlu ci Diiné-ji Association had set up on the Diamalaye. Titled “Le Messie Seydina Issa Rohou Lahi,” it consisted of the historic photographs and photo montages shown above and short explanatory texts in French (all quite legible if you view the image bellow), erected on A-frame display boards.

Figuring prominently along with the studio portraits of Seydina Issa was the Catholic devotional image of the Sacred Heart of Jesus  posted below. Upper-most and central was the photo of the composite Jesus/Issa drawing (artist unknown to author) with which I began this post (did it get your attention?).

This Catholic image of the Sacred Heart of Jesus represents Issa in his first incarnation. (photograph displayed at the Diamalaye exhibition 2006)

Dakar has a sizable Catholic population and the Catholic Church has run institutions in Senegal for centuries. Religious images such as this one circulate freely and have done so for a long time. While the Layenne use conventional Islamic sciences to defend their unconventional doctrine of Issa’s second coming, they also employ patently Christian images to express that doctrine visually.

The Layenne have embraced the very same blonde-blue-eyed-Jesus imagery which many African and African-American Christians have decried as white-supremacist and colonial. I wonder, when they met in New York City in 1924 and declared Jesus to be black, were the delegates attending the Fourth International Convention of Negros of the World aware that a black Jesus was leading a Muslim community in French Africa?

Sources on the Layenne Sufi order

Sources on Jesus in Islam

3 Responses to Christmas in Cambérène