Just published: four entries in the Wiley-Blackwell Encyclopedia of Urban and Regional Studies

Posted on August 3, 2019 by ericrossacademic

Wiley-Blackwell has just published its five-volume Encyclopedia of Urban and Regional Studies, edited by Anthony Orum. I am happy to have contributed four entries to this work. 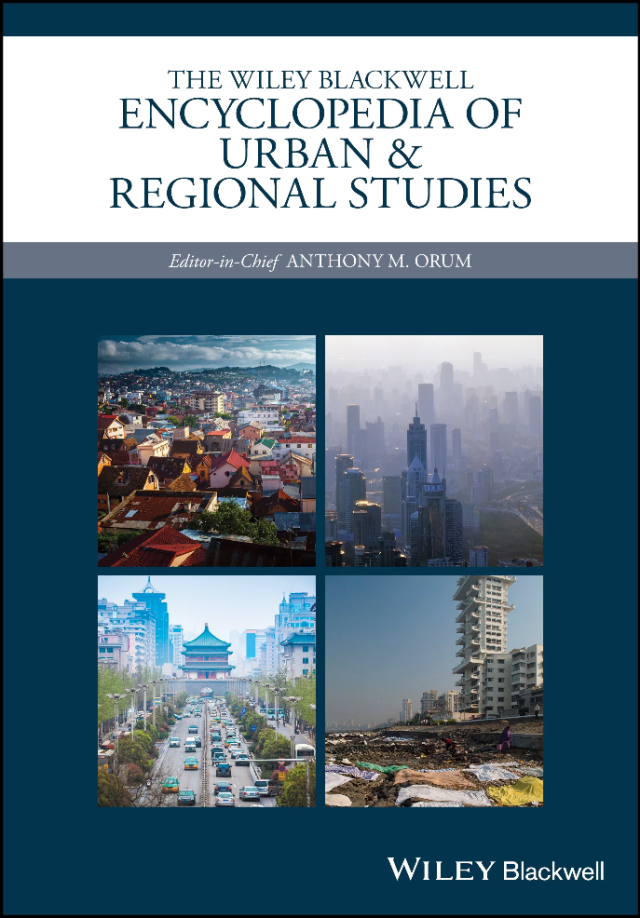 These contributions allowed me to revisit a few of the key thinkers and actors I had studied decades ago as a student of Urban Geography.

Daniel H. Burnham was an American architect and urban planner. He pioneered modern construction techniques, particularly the steel-frame and curtain-wall commercial buildings (skyscrapers) which characterized the “Chicago School” of architecture in the 1880s, and he was one of the most influential figures in the City Beautiful movement. Burnham was responsible for designing Chicago’s Columbian Exposition (1893), and for proposing master urban plans for Washington D.C. (1902), Manila (1905) and Chicago (1909).

Daniel Burnham was arguably the “father” of American urban planning. The classic Beaux-Arts Columbian Exposition had a huge impact on architectural taste in the USA and brought both municipal governments and popular opinion to prioritize urban planning and civic improvement during the Progressive Era. The McMillan Plan for Washington DC and the Chicago Plan of 1909 set the standard for American urban planning until WWII. Though Daniel Burnham’s Beaux-Arts designs, and the City Beautiful movement more generally, have often been disparaged for their superficiality and aestheticism, they initiated a lasting popular enthusiasm for improving urban life. The debate over Daniel Burnham’s legacy continues today.

Robert Moses was an urban planner and public administrator who worked in various capacities for both the State of New York and New York City from the 1920s until the late 1960s. He was the most powerful and influential American urban planner of the mid-Twentieth Century. His career corresponded to the apogee of New York City as the largest city in the world. He was responsible for the planning and construction of a great deal of the metropolitan area’s modern transportation infrastructure, public housing, park systems, urban renewal projects, and flagship projects such as the UN Headquarters, Lincoln Center and the world fairs of 1939 and 1964.

Moses has often been compared to Baron Georges-Eugène Haussmann, the mid-19th-century modernizer of Paris. A product of the reform-minded Progressive Era, Moses amassed unparalleled power as New York City’s “Construction Coordinator”. As a student, I was a steadfast fan of Jane Jacobs, the journalist-activist who took Moses on and thwarted his plans to plow an elevated expressway through Lower Manhattan. Jacobs argued that his brand of urban renewal (bulldozing mixed-use working-class neighborhoods to replace them with middle-class housing estates), mega-project civic boosterism (world fairs, The UN Headquarters, the Lincoln Center), and car-oriented transportation infrastructure (expressways, parkways and bridges) devastated the civic life of US cities. Yet, the vilification of Robert Moses by his numerous critics is sometimes misplaced. Mid-century urban planning practices would have devastated swaths of New York City whether Moses had coordinated them or not. And while Robert Moses undoubtedly held racist views, those views were common to the entire white establishment at the time; his designs for New York City’s public parks and housing projects were no more racist in their effects than contemporary plans in other major US cities. The debate over the legacy of Robert Moses continues today.

Jean Gottmann was a Russian-born French geographer whose most important work was conducted in the United States. Twice in early life he found himself a refugee, first fleeing the turmoil of the Russian Revolution as an infant (he ended up in Paris), and then having to flee the Nazi occupation of France in 1940 (which put an abrupt end to his doctoral research). When he reached the US in December 1941 he was welcomed by Isaiah Bowman. During the remainder of the war he contributed to the war efforts of both US (Construction Board for Economic Warfare) and Free France. After the war, he simultaneously held academic positions in France (CNRS, Institut des Études Politiques, École des Hautes Études en Sciences Sociales), the USA (Johns Hopkins University, Princeton) and the UK (Oxford University). Gottmann published on a wide range of issues in political and economic geography. He is mostly remembered as an urban geographer, and especially as the father of the concept of “megalopolis.”

Population density map of the Boswash megalopolis (Boston to the Washington DC metropolitan areas, source: Bill Rankin, wikipedia commons: https://en.wikipedia.org/wiki/File:Boswash.png). Gottmann was the first to study this gigantic urban conurbation as a single entity, and to designate it as “Megalopolis.”

The term “megalopolis” designates the largest type of urban conurbation. The concept was first defined by Jean Gottmann to designate the heavily urbanized  Northeastern Seaboard of the United States (Boston to Washington DC). According to Gottmann’s definition, a megalopolis is a poly-nuclear urban region consisting of a number of large metropolitan areas closely integrated through transportation and communications networks and having a minimal population of 25,000,000 people. When Gottmann published his Megalopolis: The Urbanized Northeastern Seaboard of the United States in 1961 this region was the only one in the world to fulfill these conditions. Since then, megalopolises (megalopoli?) have developed elsewhere. Among these are the Tokaido megalopolis in Japan (Tokyo to Kobe), the Rio de Janeiro-São Paulo Extended Metropolitan Region, the Gulf of Guinea (Onitsha to Accra), Jing-Jin-Ji (Tangshan-Beijing-Shijiazhuang), the Lower Yangtze (Nanjing-Shanghai-Hangzhou-Nigbo), and the Pearl River Delta (Guangzhou-Shenzhen-Hong Kong-Zongshan). While the concept of megalopolis has once again gained currency among both scientists and social commentators, the definition of the term is rather elastic and it competes in the literature with such other related terms as “megapolitan area,” “megalopolitan region,” “megacity,” and “global city region.”